‘The Humans’: An American family on the ledge

SPECIAL TO THE HERALD

In between family jokes, shared memories and old rituals, a sense of peril hangs over the Blake family as they celebrate Thanksgiving dinner.

Astutely observed, the 2016 Tony Award-winner for Best Play has been brought to life by Merely Players with a splendid cast, a tellingly downscale set and a dark sense of urgency.

The dinner-table genre may be older than lace doilies, but Karam’s neo-realist interpretation sets today’s paper plates and plastic cups in a distinctly murky and troubled world. 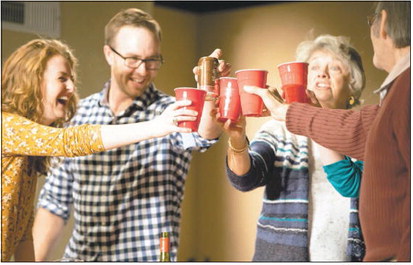 Three generations of Blakes gather in a cobbled- together basement apartment in New York City. The script calls for two levels as if two apartments had been revamped to make one with a connecting spiral staircase. Because the DAC has a long, low-ceilinged stage, Tech Director Charles Ford had a major challenge. He created an illusion of a two-story flat by spreading out the sections horizontally and adding stairs down and around the stage apron where utility boxes front a faux cement wall. For a hyper-realistic play, it isn’t the best solution, but it’s what DAC limitations forced.

When Richard Saad (the excellent Jeff Graves) calls up from the basement kitchen, the one outlier adds to the family drama by acting often as a foil. Extended family members are alluded to throughout – an aunt and uncle and a parish priest. There is no escaping this is an Irish Catholic generational story with an immigrant grounding. The singing of “The Parting Glass” is a moving centerpiece as is a table prayer which stirs Momo to a moment of recognition.

Director Mona Wood-Patterson has chosen her cast wisely and has melded them into a tight-knit ensemble. Family dynamics spill over in love and conflict, affection and bitterness, and there’s time to breathe, to take in an important announcement or moment of insight.

Karam is a young American playwright in the tradition of Eugene O’Neill and Edward Albee as he examines the American family and poises a sharp carving knife over the American Dream. The sense of existential dread that hangs over “The Humans”is lightened by flashes of humor, so it’s no surprise that Karam has adapted two of Anton Chekhov’s plays for Broadway. I never thought I’d see an American Chekhov, but Karam just might be the guy.

The Blake’s Thanksgiving dinner runs about 90 minutes in real time with no intermission.

Judith Reynolds is an arts journalist and member of the American Theatre Critics Association.

Click here to see this page in the eEdition: